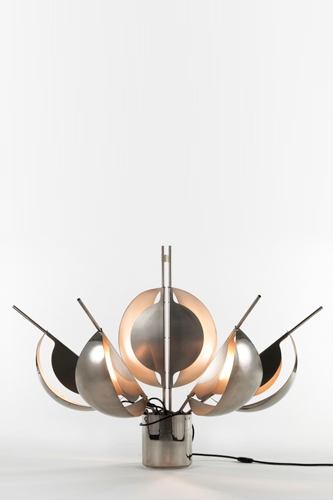 ...Things started to change by the late 1960s. The designs championed by the French firm Verre Lumiere, which was another initiative of Ingrand and was active from 1969 to 1989, pushed the boundaries of what was possible. Sabine Charoy’s brass and steel Floor Lamp from 1969 stands nearly six feet tall and resembles an unearthly piece of industrial equipment but proves itself practical. Its counterweight lets the user wheel its light around at will to loom over a desk or hover near the floor or float near the ceiling. Its light, which sits in a semi-circular metal bowl, rotates in a circle for still more flexibility.

An even greater Verre Lumiere triumph was Jean-Pierre Vitrac’s Flower Lamp, dating to 1970 and fashioned from chrome and stainless steel. Stephane Danant of Demisch Danant, a gallery with locations in New York and Paris, has a special place in his heart for Verre Lumiere and Vitrac’s lamp. He estimates that the company made perhaps 20 examples, and he happily lives with one. It has six individual petals that can be posed in various ways—closed, open, partially open. “When it’s closed, or has one petal open, it’s much quieter,” Danant says. “When it’s all out there, it’s like a Christmas tree—too crazy, too noisy. It’s more of a lighting sculpture than a real lamp.”

It’s also heavy. When Vitrac brought the cardboard Flower Lamp model to Verre Lumiere, he apparently assumed it would be produced in plastic, not metal, so it likely carries a heft that he did not intend. But Danant isn’t bothered by its quirks, and neither are its admirers. “I never tire of it,” says Danant. “Serious works of art and design, you never get bored of them. They always stay beautiful.”

Around the same time that Vitrac was toting his cardboard maquette to the Verre Lumiere factory near Paris, American studio furniture artist Wendell Castle was unveiling Pinkie, a bubble gum-pink arch-shaped floor lamp made from fiberglass-reinforced plastic and crowned with a single round bulb. Castle had intended it as a limited edition, but for whatever reason, it didn’t find favor with the public in 1969. Forty years later, Meyers and his gallery stepped up to realize the artist’s vision of a series of eight. “We think he’s a good designer, and people need to know more about him,” Meyers says, adding, “In the end, Pinkie is really not a lamp. It’s a sculpture with a bulb in it,” says Meyers.

Read More
Back To Top