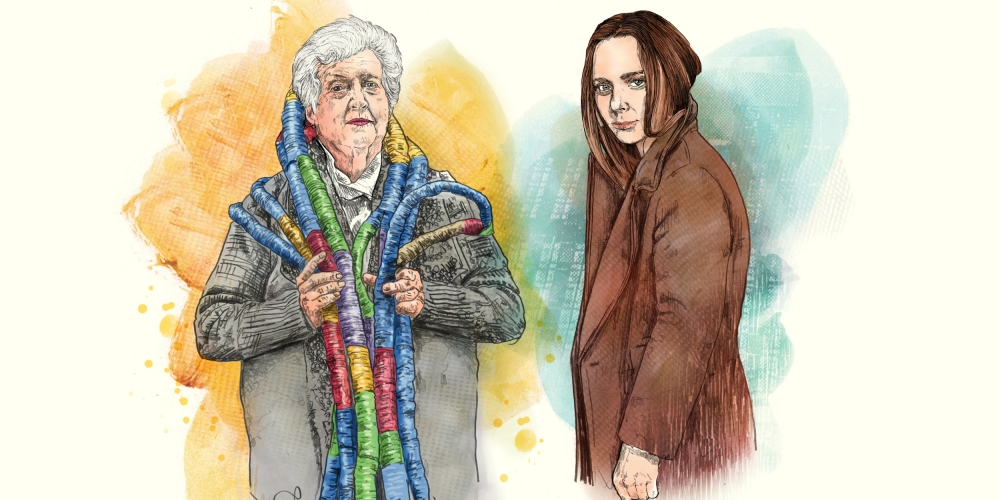 The ARTnews Accord: Stella McCartney & Sheila Hicks Talk About Mindfulness in Fashion and Art

Stella McCartney began her career as a fashion designer in the 1990s, most notably as the creative director of Chloe in Paris, and launched her own eponymous fashion house in 2001. In addition to her celebrated eye for design, she has been an advocate for animal rights (“a lifelong vegetarian, she has never used leather, feathers, skin, or fur in any of her designs since day one—a revolutionary stance, then and now,” a mission statement reads) as well as issues of sustainability regarding materials and manufacturing. For her Spring 2021 collection, she collaborated with artists on an “A-to-Z manifesto” that pairs each letter in the alphabet with a progressive idea (A for Accountable, V for Vegan, and so on).

One of those artists is Sheila Hicks, who studied with Josef Albers in the 1950s and in the decades since has created sculptural artworks using fabrics and fibers as well as various methods of weaving, knitting, knotting, and braiding. Her work appeared in the 2017 Venice Biennale and the 2014 Whitney Biennial, and her reputation has grown alongside rising recognition of textile and fabric art, for a time underappreciated as a matter of craft. Hicks’s solo exhibition “Thread, Trees, River” opens at the Museum of Applied Arts (MAK) in Vienna in December and runs until mid-April 2021. For the “A-to-Z manifesto” project with McCartney, with whom she first collaborated in 2019, Hicks reinvigorated the designer’s classic Falabella handbag.

From London and Paris, respectively, McCartney and Hicks joined ARTnews for a videoconference in September to talk about sheep, mindfulness in fashion and art, and working together as colleagues and friends.

ARTnews: What are your earliest formative memories of experiencing art?

Stella McCartney: My grandfather was a lawyer who represented Mark Rothko, Willem de Kooning, Yves Klein, Robert Motherwell, and many of the great Abstract Expressionists. He would swap his time for their work and ended up having one of the largest private collections of Abstract Expressionism in the world. But it was all from love—every single part of it was passion and pure affection for art. My grandmother actually thought he was crazy and would shout at him when he would come back with another piece of art. When I was small, my early memories would be of going into his apartment in New York, where he had many Joseph Cornells. He was great friends with Cornell. As a child, I remember there was a low shelf in his library with all of these Cornell boxes lined up. He had extraordinary work on the walls, but it was the Cornells that really captured my attention because they were so childlike and playful.

Sheila Hicks: I’m going to do a fast-forward and say that when I was in London making a show a few years ago, the director of the gallery said, “There is someone I want you to meet who I think you will like and appreciate.” That was Stella. I went to her showroom, and the first thing she talked to me about were her sheep. I am known as sort of a consultant and a problem solver. So I knew why I was there: they wanted me to do something about these sheep. To me, it was great because it was something concrete. When you meet someone for the first time there’s a lot of small talk before you can get into some kind of substance of any kind.

McCartney: I don’t think we’ve ever had small talk, you and I.

Hicks: As I remember you said, “People are not ordering or wearing the scratchy or heavy wool as much as they used to. I raise sheep out in the country and I am very worried about their future.” I loved the idea of having to be concerned and occupied about the future of these sheep.

McCartney: I have a few sheep. They are called Itsy-Bitsy, Teeny-Weeny, and Yellow Polka. I haven’t got Dot and Bikini. They grow old gracefully, and they are completely organic—and every summer we sheer them so I have all this wool. My mother and father also had tons of sheep. We never killed them so they would always live a long, healthy life. And the wool we would weave into Native American–style rugs and blankets and things. I got the wool woven into some yarn and I made a sweater—you could smell the lanolin so heavily, and it literally could stand up on its own. It was so rough and tough, hard-core wool. So, yes, that was my project for Sheila: I would love a piece by you with my organic sheeps’ wool. We are yet to do it. Every couple of weeks I’m like, What’s going on with my sheep wool?

Hicks: I keep thinking you think I’m going to make it into something wearable.

Looks from a collaboration between Stella McCartney and Shelia Hicks on the runway for a Winter 2019 collection.

Sheila Hicks/Historic Works
Back To Top