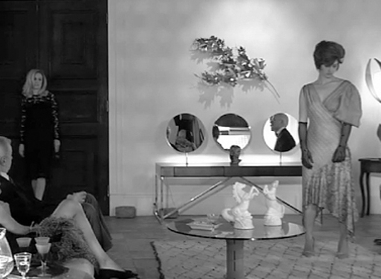 In her new film El Monte, Yelena Yemchuk’s crisp black-and-white rendering of a feverish dream is reminiscent of Fellini’s 8½, even using a breathless soundtrack in homage to the opening of the Italian director’s autobiographical masterpiece. An elegant, if unsettling, platform to showcase a festival of vintage gowns, El Monte features supermodel Natasa Vojnovic, who gives an accomplished and poetic performance, actor Ebon Moss-Bachrach, musician Melissa Auf der Maur and the haunting voice of Elisa Silver. Shot at Dactyl Foundation for the Arts in New York, with mid-century furniture on loan from Chelsea’s Demisch Danant gallery, the set designed by Ukraine-born Yemchuk could easily be mistaken for a location featured in La Dolce Vita or Juliet of the Spirits. Long before the photographer was shooting fashion editorials for Italian Vogue, V, i-D and The New Yorker, as well as ad campaigns for Kenzo, Vera Wang and Dries Van Noten, and videos for Smashing Pumpkins (the grunge band led by one-time boyfriend Billy Corgan) she was a young photography student at Art Center in Pasadena, California. It was there that a professor compared her work with that of Il Maestro, leaving the 21-year-old flattered, but a little mortified. “I said, ‘thank you,’ but was totally embarrassed,” she says, “because I had never seen a Fellini movie at the time!” She of course promptly ran home to correct this oversight. “Once I discovered Fellini, and then Tarkovsky and David Lynch, these people were in my head and they’re super-influential to me still.”