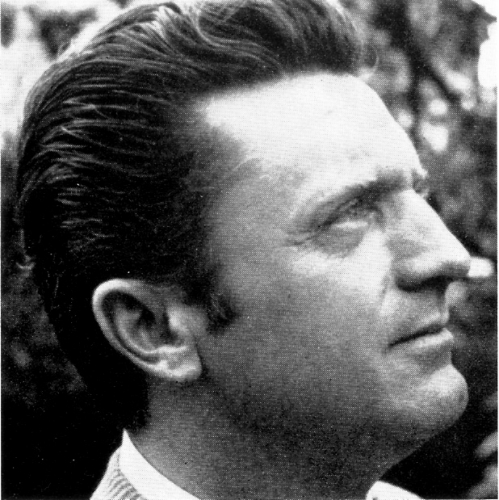 Joseph-André Motte is one of the most substantial post-war French modern designers. Reflecting a commitment to the idea that modern design could resolutely improve society, Motte remains a feature of everyday French life through his large-scale designs of public spaces throughout the country. His works cascade through venues as regal as the Louvre and as quotidian as the Parisian metro, testing material and annunciating the significance of affordable design in a changing world.

Born in Saint-Bonnet, a village in the Hautes-Alpes of France, Joseph-André Motte studied applied arts in Paris as a student of René Gabriel, Louis Sognot, and Albert Guénot. By 1954, Motte had founded his own design agency and created the Atelier de Recherche Plastique (ARP) with prominent designers Pierre Guariche and Michel Mortier—both of whom he met while studying in Marcel Gascoin’s workshop.

A figurehead of the French modern movement, Motte was frequently com­missioned by the French administration to participate in grand public projects including the interiors of hundreds of metro stations in Paris—his chairs re­maining functional pinnacles of Parisian life throughout the subway stations. Additionally, Motte conceived of the design for the Orly, 1954; Roissy, 1970; and Lyon, 1975 airports. In particular, his work with architect Henri Vicariot for the Orly Airport represented the marriage of structural and interior elements in living spaces. This genre of collaborative work between architects and interior designers rejuvenated the role of designers like Motte.

Motte experimented widely with wood, stainless steel, Formica, and plastics. The variety of these materials reflected a desire to humanize the spaces he worked in, particularly as the use of concrete and other typically cold sub­stances became fashionable in architecture. He once explained, “material is in charge, then imagination.” Moreover, Motte’s choice of otherwise overlooked materials contributed to cost-effective production. His desire to be economical existed in tandem with his belief that large-scale manufacture of works offered consumers a means to personalize their living environments.

Motte’s work represents the intersection of beauty and functionality in the face of an industrial society. Motte’s work is in the collection of the Musée des Arts Décoratifs, Paris; Musée du Louvre, Paris; and a number of public forums in­cluding the Hôtel de Ville, Grenoble, France, 1968 and the Council of Europe’s building, Strasbourg, France, 1973. Motte earned the René Gabriel Prize in 1957, the Grand Prize of the International Exposition, Brussels, 1958, and was hon­ored as a Commandeur des Arts et des Lettres, the highest distinction award­ed by the French Ministry of Culture.